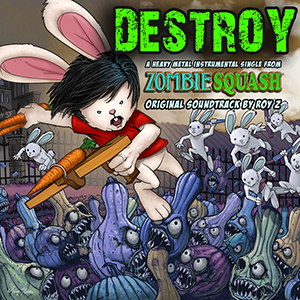 While the heavy-metal instrumental will be available at iTunes, Amazon, and other global outlets on June 17th, beginning today, fans of the official Zombie Squash Facebook page (http://facebook.com/zombiesquash) can download a complimentary MP3 of “Destroy.” Users simply have to visit the Zombie Squash Facebook page, click on the “Destroy MP3” tab and “Like” the page. A download link is then revealed to the user.

“Destroy” is a high-tempo, shredding piece by Roy Z, known for his stellar production work with Sepultura, Sebastian Bach and Halford. With numerous credits including producing Judas Priest’s ‘Angel of Retribution’ which debuted at #13 on the U.S. Billboard chart in 2005, Roy Z’s signature ferocious skills are evident in the Zombie Squash soundtrack he created. Roy Z plays guitar, bass and keys while Dave Moreno (Tribe of Gypsies) provides the bombastic drums. “Destroy” was mastered by metal maestro Maor Appelbaum (Adrenaline Mob, Yngwie Malmsteen). The song erupts with a furious pace as does the thrill of the Zombie Squash game. Additional original songs by Roy Z are heard throughout the game. A full-length Zombie Squash soundtrack written and produced by Roy Z will be released later this year.

A recent FEARnet review of the Zombie Squash game referred to the soundtrack as “headbanging metal…auditory mayhem.”

Zombie Squash is a free game for Apple and Android phones and tablets and features the voice talents of George A. Romero, the iconic director of Night of the Living Dead, Dawn of the Dead, and is known as the Godfather of all zombies.

Zombie Squash is a world where plants and vegetables like turban squash and pumpkins turn into zombie squash spawned from the evil experiments of Dr. B. E. Vil (Romero), owner of a controversial bio-chemical, genetics company Monsterno Corporation.

Zombie Squash is a tower defense style game where you play as Jack Stompingtail, a fearless rabbit who fires carrots, zucchini and other garden ammo at the zombie squash onslaught. The player has to try and stop the Zombie Squash from taking over the world. An addictive, survival-mode mini-game is also included.

The fun-for-all ages, tongue-in-cheek, action game is available for free from iTunes, GooglePlay and Amazon.com. Free HD tablet versions of Zombie Squash are also available for the iPad and Kindle Fire.