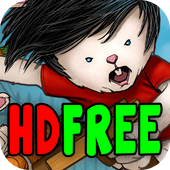 Phoenix, AZ November 20, 2012 — George A. Romero, the godfather of all zombies and the iconic director of ‘Night of the Living Dead’ is the lead voice actor in Zombie SquashTM HD Free, released today at iTunes for the iPad by Attila’s Creative Works.

Zombie SquashTM is a world where veggies like turban squash and fairy tail pumpkins are zombies spawned from the evil experiments of Dr. B. E. Vil (played by Romero) owner of the controversial bio-chemical, genetics company Monsterno Corporation. “It’s not a game about squashing zombies, it’s a game about zombie squash,” states Romero in the Zombie SquashTM trailer.

Zombie SquashTM is a tower defense style game where you play as Jack Stompingtail, a rabbit who fires carrots, zucchini and other garden ammo at Dr. B. E. Vil’s horde of gourde onslaught. The player has to try and stop the Zombie SquashTM from taking over the world.

After competing the first 5 levels, you unlock the addictive, survival mode mini-game with Gamecenter Leaderboards.

Owner Attila Juhasz is no stranger to the horror entertainment and app development. Last month, he released the top-rated iPad app, ‘Horror Movies and Trivia’ with over 100 ratings for an average rating of 4.6 our of 5.0 stars. He has written for genre magazines including Fangoria and Sci-Fi Teen. In 1996 he launched what many consider to be the first commercial horror web site, horrormovies.com, which he sold to publicly traded Unapix Entertainment Inc. and became their Director of Internet Marketing. In 2000 Attila produced the first global Internet Seance. He currently owns and runs HorrorMoviesBlog.com, HorrorEntertainment.com, the newly launched HorrorPublicity.com. He has created graphics, designed packaging, and edited films and videos distributed globally by Time Warner Entertainment, Sony Music Entertainment and Universal Music Group. Attila is celebrating his 20th anniversary in online creations building his first dial-up bulletin-board system (BBS) in 1992. He has built over 100 websites for Lifetime Television, Newman’s Own, Kraft, DuPont and many others.

Attila’s Creative Works LLC was formed by Attila Juhasz in Phoenix, AZ in 2005 offering marketing and creative services including web design, graphics, app development, editing and DVD authoring. ACW owns and operates a network of websites and has released Apps for iPhones and Android phones including ‘Horror Movies and Trivia,’ ‘The Logical Meaning of God,’ ‘Panda Drop’ ,and ‘HorrorMoviesBlog.com Movie Streaming App.’

Other ACW divisions and web sites include: